You are here: Webwiki > torontopartybus.ca Add your website for free 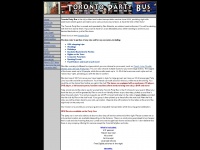 Reviews and ratings of Torontopartybus.ca

1 review has been written for Torontopartybus.ca yet.

Excerpts from what is now an open letter to Rex Almeida from Toronto Party Bus. (I sent this email to him the day after the event and hoped he would find a way to rectify the problem. But rather than customer service, I got arguments and after an hour of treating me like someone who didn't just pay him $1000 for a busload of problems he told me that, the bus “driver said (we) had fun so…. “ (anyone else hear crickets?) Another quick note, Rex told me he had never had a customer complaint before. When I told him about the other bad review listed her on Yelp, he basically called the other reviewer a liar and made up a completely different story about what happened. After my experience, I know who I believe)

I booked your 20 person “Karaoke Party Bus” for the night of Saturday, May 4th, 2013. Fortunately, we had a great night for my sister’s bachelorette party; unfortunately it was in no part due to the service we were provided by your company.

The karaoke part of your bus service was extremely disappointing... had an electrical buzzing coming from the speaker, so we could barely turn up the volume, a TV screen that blocked 50% of the written lyrics on the screen...ONLY 4 karaoke DVD’s to use. 2 DVD's were love songs, one didn’t work and the one that had party music .... no later than 2000....

We asked for 2 bars. The driver was told to do only one drop-off at C-Lounge and specifically said that he doesn’t do split-drops. In our email correspondence we agreed that you would have us at Crock Rock and then C-Lounge.

There was another group that used our bus. You specifically said that, “no one else will be using the bus but your group only.” We had intended to leave purses, jackets and other personal items on the bus, given that promise. So I was pretty surprised when (the driver left to pick up)...a group of men coming onto our bus. He reassured me that they were good men, all businessmen and that our stuff would be OK. We didn’t have exclusive use of the bus for the evening and the fact that you did not disclose that was a huge inconvenience for us. (later, in his list of excuses Rex told me that the driver went to pick up a group of girls stranded on the highway...not sure who to believe)

We had to wait almost an hour and a half for the bus to pick us up. …we discussed an earlier pickup than 2am and you said to inform the driver and we could go early. We told him 1am, and ended up having to wait until almost 2:30 for him to pick us up, with no explanation. I assume it was because he was busy with the other group on our bus. As a result we didn’t get back to our drop-off point until after 3am. For the dynamics of our group (I explained to Rex that we had a newly expectant mother on the bus and a woman with diabetes who needed to get home to take her pills...he was very unconcerned about these problems) this was not acceptable.


No person found this review helpful yet.

Important pages are Karaoke Bus, Coach Limo Double Decker And A Full Size Party Van and About Us. In the following table you'll find the 10 most important pages of Torontopartybus.ca:

The web server used by Torontopartybus.ca is located in Pompano Beach, USA and is run by LiquidNet US LLC. On this web server 82 other websites are hosted. The language of those websites is mostly english.

A Apache server hosts the websites of Torontopartybus.ca. HTML 4.01 Transitional is used as markup language on the webpages. The website does not specify details about the inclusion of its content in search engines. For this reason the content will be included by search engines.