You are here: Webwiki > thepriscillas.co.uk Add your website for free

Thep­riscil­las.co.uk - THE PRISCILLAS (No review yet) 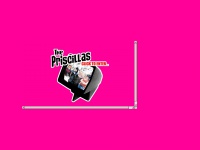 Reviews and ratings of Thepriscillas.co.uk

The Priscillas are mainly rock music group, formed in late 2003, in London. Their two singles were played on Radio 1, BBC 6Music, Xfm, and WFMU. The girls have also played sessions for Marc Riley on BBC 6Music, have been interviewed on Phill Jupitus's 6Music's breakfast show twice, plus sessions for Resonance FM, and WFMU in New York. read more

The web server used by Thepriscillas.co.uk is run by UK2 - Ltd and located in Great Britain. On this web server 57 other websites are hosted. The language of those websites is mostly english.

A Apache server hosts the websites of Thepriscillas.co.uk. HTML 4.01 Frameset is used as markup language on the webpages. Due to the use of frames and framesets the visibility in search engine results may be affected negatively. The website does not specify details about the inclusion of its content in search engines. For this reason the content will be included by search engines.