You are here: Webwiki > the-holocaust.info Add your website for free

The-holocaust.info - Documents Reporting Hitler, Nazis and the Holocaust (No review yet) 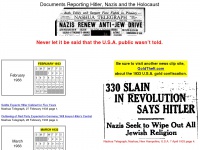 Reviews and ratings of The-holocaust.info

The Holocaust, also known as the Shoah, was the genocide of approximately six million European Jews during World War II, a programme of systematic state-sponsored murder by Germany, led by Adolf Hitler and the Nazi Party, throughout German-occupied territory. read more

Important pages are Seldte Expects Hitler Cabinet For Five Years, Outlawing Of Red Party Expected In Germany Will Insure Hitler&146S Control and Militant Germany At Ceremonial. In the following table you'll find the 10 most important pages of The-holocaust.info:

The websites of The-holocaust.info are served by a Apache server. The website does not specify details about the inclusion of its content in search engines. For this reason the content will be included by search engines. In order to display ads the Google Adsense advertising network is used. The homepage of the website is "/index.htm".