You are here: Webwiki > teddybears.lv Add your website for free

Teddybears.lv - Brusja Bears - Teddy bears in Riga (No review yet) 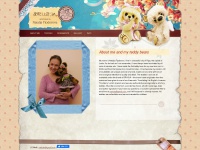 Reviews and ratings of Teddybears.lv

Teddybears is a Swedish band formed in 1991, known for mixing pop, rock, hip-hop, electronica, reggae, punk and many other genres. Teddybears began as a grindcore group called Skull. As for the name Teddybears, Joakim Åhlund says, "If you're familiar with the Swedish or Norwegian black metal scene, you know back then every band was called things like 'Corpse Grinder From Hell'. read more

Important pages are About Me, For Sale and For Adoption. In the following table you'll find the 5 most important pages of Teddybears.lv:

A profile of Teddybears.lv was found on the social network GooglePlus.

The web server used by Teddybears.lv is located in Riga, Latvia and is run by LATNET ISP. The server runs exclusively the website Teddybears.lv.

XHTML 1.0 Transitional is used as markup language on the webpages. The website does not specify details about the inclusion of its content in search engines. For this reason the content will be included by search engines. The visitors are redirected to the homepage of the website "/bears.nsf".