You are here: Webwiki > tdu.org Add your website for free

Tdu.org - Teamsters for a Democratic Union (No review yet) 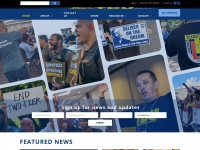 For A Democratic Union

Reviews and ratings of Tdu.org

Teamsters for a Democratic Union is a rank-and-file union democracy movement organized to reform the International Brotherhood of Teamsters, or Teamsters. TDU was created out of the merger of the Professional Drivers Council and Teamsters for a Decent Contract in 1979... read more

Tdu.org presents an article about a specific topic.

Important pages are Sign In, Become A Tdu Member and Contact Us. In the following table you'll find the 10 most important pages of Tdu.org:

The web server used by Tdu.org is located in Europe and run by Akamai Technologies. On this web server 44 other websites are hosted. The language of those websites is mostly english.