You are here: Webwiki > samlocksmithwolverhampton.co.uk Add your website for free 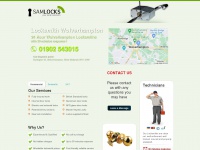 All jobs are at a fixed price with no call out charge, so free and friendly advice can be offered. Because we are a mobile locksmith company rather than a shop, we can supply quality locks and architectural hardware at low prices.
Having a strong customer business relationship is important. That's why our locksmiths are polite, on time and always ensure they complete the task at hand.

Reviews and ratings of Samlocksmithwolverhampton.co.uk

A total of 2 reviews for Samlocksmithwolverhampton.co.uk have been written yet. The most recent reviews are listed below.

Roy fitted a new lock for my front door, the job was completed to a excellent standard and their prices were very reasonable. I found the locksmith to be very polite and friendly, he was clean and tidy when working and I would highly recommend him.

No person found this review helpful yet.

I had a lock out incident with my car yesterday and I called you guys, took the recommendation of a friend and I didn`t regret it. You keep your standards high and you should be proud of the service you provide! Keep it going!

No person found this review helpful yet.

In the following table you'll find the 2 most important pages of Samlocksmithwolverhampton.co.uk:

The web server used by Samlocksmithwolverhampton.co.uk is run by 012 Smile Communications and located in Israel. There are many websites run by this web server. The operator uses this server for many hosting clients. In total there are at least 361 websites on this server. The language of these websites is mostly english.

The Samlocksmithwolverhampton.co.uk websites were developed using the programming language ASP.NET and served by a Microsoft-IIS server. For managing the data of the webpages the CMS DotNetNuke is used. XHTML 1.0 Transitional is used as markup language on the webpages. To analyze the visitors, the websites uses the analysis software Google Analytics. The website does not specify details about the inclusion of its content in search engines. For this reason the content will be included by search engines.