You are here: Webwiki > justmaybe.co.uk Add your website for free 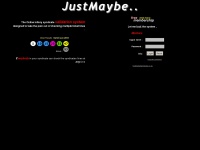 Reviews and ratings of Justmaybe.co.uk

The National Lottery is the state-franchised national lottery in the United Kingdom and the Isle of Man. It is operated by Camelot Group, to whom the licence was granted in 1994, 2001 and again in 2007. The lottery is regulated by the National Lottery Commission, and was established by the then prime minister John Major in 1994... read more

The web server used by Justmaybe.co.uk is located near the city of Gloucester, Great Britain and is run by Fast Hosts LTD. There are many websites run by this web server. The operator uses this server for many hosting clients. In total there are at least 219 websites on this server. The language of these websites is mostly english.

The websites of Justmaybe.co.uk are hosted by a Microsoft-IIS server and were developed in the programming language ASP.NET. The obsolete technology of framesets is used on the webpages. Due to the robot information on the webpage, the following actions by webcrawlers are not allowed: following the links and indexing the website. All other actions by webcrawlers are allowed.