You are here: Webwiki > byzantineempires.org Add your website for free 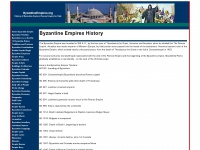 Reviews and ratings of Byzantineempires.org

The table shows the most important links to Byzantineempires.org. The table is sorted in descending order by importance.

The table shows websites of Byzantineempires.org, which are often linked by other websites and therefore they are classified as important content.

The web server used by Byzantineempires.org is run by GoDaddy.com, LLC and is located in Scottsdale, USA. On this web server 12 other websites are hosted. The language of those websites is mostly english.

A Apache server hosts the websites of Byzantineempires.org. HTML 4.0 Transitional is used as markup language on the webpages. The website does not specify details about the inclusion of its content in search engines. For this reason the content will be included by search engines. The website contains ads by Google Adsense.