You are here: Webwiki > bombay.cc Add your website for free 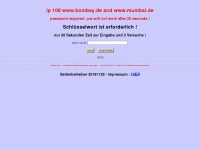 Reviews and ratings of Bombay.cc

Bombay is a critically acclaimed and national award-winning 1995 Tamil film directed by Mani Ratnam, starring Arvind Swamy and Manisha Koirala, with music composed by A. R. Rahman. The film met with a strong reception upon release. read more

The websites were created using the programming language PHP and they are hosted on a Apache server, which runs on the operating system Unix/Linux (Unix). The markup language of the website is html 4.0 Transitional. Due to the robot information on the webpage, the following actions by webcrawlers are not allowed: following the links and indexing the website. All other actions by webcrawlers are allowed.