You are here: Webwiki > aquam.co.za Add your website for free

Aquam.co.za - Bed and Breakfast Accom­moda­tion in beachfront suburb of Humewood Port Elizabeth (No review yet) 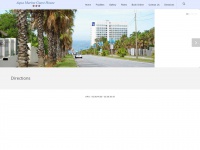 Reviews and ratings of Aquam.co.za

Port Elizabeth is one of the largest cities in South Africa, situated in the Eastern Cape Province, east of Cape Town. The city, often shortened to PE and nicknamed "The Friendly City" or "The Windy City", stretches for 16 km along Algoa Bay, and is one of the major seaports in South Africa. read more

The web server with the IP-address 196.22.178.236 used by Aquam.co.za is run by MWEB and is located in South Africa. The server runs exclusively the website Aquam.co.za.

The Aquam.co.za websites were developed using the programming language ASP.NET and served by a Microsoft-IIS server. HTML 4.0 Transitional is used as markup language on the webpages. Indexing the data of the website and following hyperlinks on it is explicitly allowed by robot information.